Moonshine – Bimber a local, high-proof beverage from Podlasie is a product shrouded in legend and therefore desired by tourists.  Until recently, the matter for guides has been quite troublesome – obviously, illegally distilled vodka cannot be officially sold. Fortunately, on our market there are already manufactories that have undergone a complicated process of legalization and sell samogon (i.e. homebrew vodka) in accordance with the law. Phew ? Now the visitors can sit down comfortably in a barn or some other open air venue, taste the Spirit of the Forest biting on a pickle, bacon and homemade bread. It is what we call getting to know the region with all your senses….

Moonshine. What is it, actually?

Moonshine is ethyl alcohol distilled illegally with the use of somewhat primitive … or home-made methods. It should contain about 70% alcohol – classic Podlasie moonshine is vodka made with rye mash, called therefore “rye vodka”. First of all, the name “bimber”, that is moonshine is not the most commonly used one in Podlasie. In order to avoid misunderstandings, we usually refer to this drink as “samogon“. Other popular names include “the spirit of the forest” and “moonlight”. A decent wedding will not do without sękacz, i.e. a tree cake, and moonshine… This is included in our tradition, experts on the subject even claim that it is a part of our identity. One thing is certain – we have lived to see the only Museum of Moonshining in Poland in the Podlaskie Museum of Folk Culture and the relevant exhibition in Koryciny in the Herbal Corner.

A bit of history

Humankind has known alcohol since the dawn of its history. In our cultural circle, fermented grain and fruit as well as honey were first drunk. The second, more noble liquid was wine, and after “taming” the grains, beers gained popularity. In the Middle Ages, spirits appeared – the product of distillation, a process previously known only to alchemists. Until then, the alcoholic beverages obtained in the fermentation process could contain a maximum of 14-15% alcohol while the distillate was a minimum of 40%. The production of spirit soon became an important part of the economy of many countries. Vodka appeared in the 15th century in the Republic of Poland – at noble courts mixed with herbs was used as a medicine – to this day a double shot (100 ml) with pepper is a recognized remedy for stomachache in Podlasie region. The distillation revolution came with the popularization of the potato in the 17th century. Hubert Czochański writes:

…it turned out that from a specific area of land planted with potatoes one can obtain up to seven times more vodka than from the same area of land sown with grain. It took not too long for the market to react. During the 18th century, the supply from court distilleries and demand for vodka increased enormously. Representatives of all social classes drank alcohol (…)

The gentry who had been exercising the privilege of producing and selling liquor (the landowner could produce beer and spirits and own inns) since 1496, increased production – the peak moment of court distillation was the first half of the 19th century. Alcoholism became a social scourge…

Birth and development of the moonshine industry

The golden days of freedom in the production of booze and inns ended in the Russian partition around 1861, when the tsarist administration introduced excise duty and the obligation to rectify raw spirit. Legal production was impeded – clandestine brewing or in other words, moonshining was born. To date Podlasie, rich in vast forests and good water, has been an ideal place for such production…

After the outbreak of World War I, prohibition (1914-1918) was proclaimed in Russia and the entire production of alcohol was used for the technical needs of the front and for medical purposes. If we add to this the fact that most of the distilleries were destroyed due to the war, the boom of the moonshine industry should be considered an expedience. Alcohol (…) became an informal means of payment, additionally easy to obtain.

Although the Second Republic of Poland was famous for its renowned vodkas such as Baczewski, it was not a widely available product. The poor province and then the whole country affected by the crisis had to cope somehow. Inventive moonshine facilities were fuming… their golden age was the Second World War and the time just after it when everyone who could distilled samogon. We all remember famous scenes from the cult film “Sami swoi” when Pawlak’s barrel with moonshine is discovered by a “Wietierinarz” (vet). After the war, the people’s authorities started fighting against illegal distillation. Draconian penalties were imposed and yet… the home-made moonshine would not disappear. On the contrary – during the martial law period and especially in the 80s it was experiencing a renaissance! Poles managed to solve much more complicated problems than mere rationing. At the same instant as innovative ideas for home appliances made of pressure cookers or milk cans emerged, the semi-professional forest industry was flourishing. 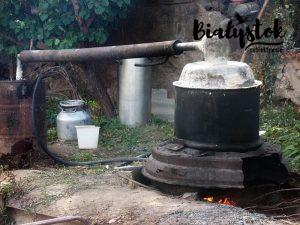 In the wilderness of the Podlasie region

In the Knyszyńska, Białowieża and Biebrza Forests as well as in the Biebrza marshes moonshine plants operate, whose production capacity is enormous. The factories amaze with their ingenuity, professional solutions and… the quality of the beverage. Every now and then, the police liquidate another forest moonshine plant to the despair of its regular customers. One of them was not blown up, but… in 2009 it went to the museum. The exhibition with complete equipment is admired by tourists and experts on the subject, especially practitioners ?. In the meantime,  the simple peasant moonshine has become an element of snobby parties, a desirable and … expensive commodity. As Andrzej Fiedoruk writes, even regional schools of moonshine distillation have been established:

Only within the Knyszyn Primeval Forest there is a forest school from the vicinity of Gródek and Michałów, a suburban school operating in Czarna Białostocka, a marsh school in the Biebrza area and a field school which comprised the areas of Michałów and Walił. The forest school, where the moonshine is seasoned with herbs such as beech or mint, is the most popular. According to experts, real moonshine can only be distilled from rye.

What does Grunwald have to do with moonshine?

In the era of the Internet, you will certainly have no problem to find a suitable recipe for mash or tips to facilitate the construction of a home distillery. However, traditionally, the best recipe is that of the Battle of Grunwald, i.e. its date: 1410. How to decipher this pattern? Supposedly as follows: 1 kg of sugar, 4 liters of water and 10 decagram of yeast. Leave it and wait. After a few days start alchemical activities…

In our country, it is still prohibited by the law to produce moonshine for our own needs. If you want to see how the moonshine plant works and taste the drink directly from the barrel, it is worth visiting Belarus. Several kilometers from the border, which you will cross in Białowieża, there is a museum – an open-air museum with an operating factory. Every visitor is given 25 grams of liquor, a piece of bacon and rye bread. Hopefully, perhaps one day we will see such an attraction on our side of the border?

Writing the text about moonshine I used the following studies as my basis: