Home » Culture » 10 must-see places in Supraśl. A weekend in Podlasie

Staying in Supraśl…Are you going on holiday in Podlasie? Or maybe you dream of a quiet weekend away from the hustle and bustle of the city and wi-fi? Excellent! You may certainly include a visit to Supraśl in your itinerary. We have here some interesting suggestions and a crib sheet with the most important attractions of this charming town. Even if you carry through the list and suddenly and fiercely want crowds, clubs and crowded pubs – remember – you have merely a dozen or so kilometers to go to Bialystok.

Supraśl – located in the clearing of the Knyszyńska Primeval Forest is inhabited by 4.5 thousand people. In 2001 the city gained the status of a health resort and has become one of the most popular places on the tourist map of Podlasie. However, do not worry – due to its location and short tourist season, we can guarantee peace, close contact with nature and history for over 11 months of the year. The hereinbelow selected attractions are only a list, it is worth using the services of guides – you must visit the Tourist Information point where you will get practical tips and necessary maps. The author of the blog also shows you around Supraśl – phone no. 504 868 400.

It is one of the most crowded museums in our region. Not without reason… Crossing the thresholds of the museum we move to the world of mysterious Orthodox spirituality. Our ears are drawn to the mystical singing of Orthodox liturgy, the rooms are darkened and our eyes see the next collections of beautiful icons and crosses. The guide introduces visitors to the arcana of the art of icon writing, discusses symbolism and finally … the icing on the cake: we watch frescoes from the sixteenth century – miraculously saved from the ruins of the monastery church, beastly blown up in the air in 1944. An hour in the Icon Museum is an extremely effective lesson and at the same time an excellent introduction to further exploration of the Orthodox heritage of Podlasie.

The monastery, i.e. the Orthodox monastery, initiated the history of Supraśl. For several hundred years the settlement which existed here worked only for the needs of the monastery. It was a thriving center of mental and spiritual life. Due to its location at the crossroads of the eastern and western culture it became the realization of the idea of the Jagiellonian state where the Orthodox, Catholics, Lithuanians, Poles, Ruthenians lived on equal rights. The Church of the Annunciation of the Blessed Virgin Mary in its architectural symbolism makes this idea come true – the Gothic towers so typical of the Latin church are united with Byzantine domes. Over the centuries, the monks have gathered real treasures in their premises… You may find there for example:

Theater experts very often ask about the legendary Supraśl stage in summer… unfortunately, during holidays (July-August) the artists have a well-deserved break. Therefore, it is absolutely and unquestionably worth coming to Podlasie in the artistic season! The Wierszalin Theater residing in Supraśl is an absolute phenomenon. Its leading position on the local art stage has been unwavering for many years. The list of awards that Piotr Tomaszuk’s troupe has received is truly impressive… Both the intriguing building (a former colonial house) and the avant-garde repertoire must be on our list. The review of “Wziołowstąpienie” is one of the most widely read articles on our blog! 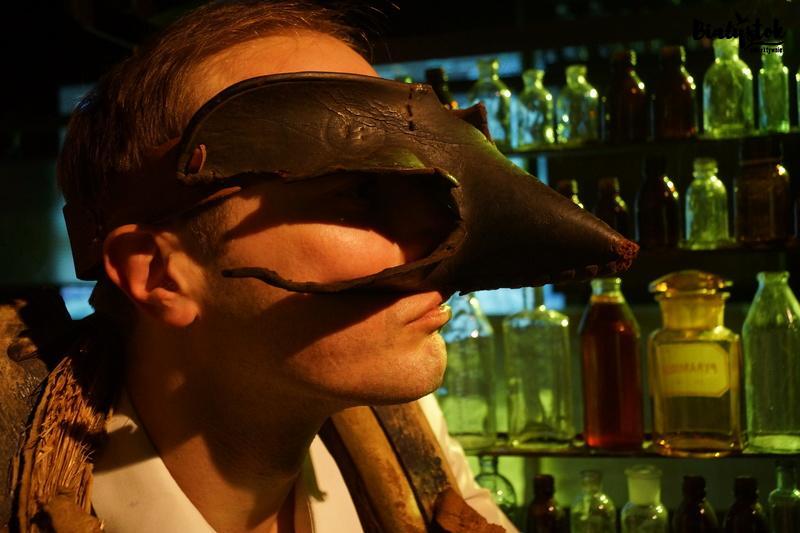 Something for the spirit and something for the flesh… in Supraśl the idea of slow food and cherishing local cuisine is obvious. You will not eat sushi here and you will not find fast food. On the other hand, whole families come here for Sunday lunch to eat kiszka, i.e. a potato sausage and a potato pie, delicious dumplings, potato pancakes, to drink bread kvass or home-brew. In other words: the regional cuisine hub! Every year Supraśl holds the World Championship in Potato Sausage and Potato Pie Baking, and the town has had a few cult restaurants known even outside the province. We will not recommend you a specific venue, we love Biesiada’s dumplings, Jarzębinka’s potato sausage, Łukaszówka’s potato pie, but many a time we have eaten in Bohema, Spiżarnia, Prynuka… Simply, they just cook great there!

In 1831, after the fall of the November Uprising, the tsarist authorities implemented severe post-insurrection repressions. Among other things, they introduced an internal customs duty on goods imported from the Kingdom of Poland to Russia. Owners of companies in the vicinity of Łódź knew that 15% of the surcharge meant the end of their prosperous business. In order to avoid murderous charges they started moving entire factories just behind the customs border. The first operative families arrived in the Białystok region in the following year. The period of Supraśl’s history as a monastery settlement came to an end. Factories popped up like mushrooms, the population was increasing and the most prominent families of industrialists – the Zacherts and Buchholtzes – started to lead the life of the city. There are many beautiful buildings left that testify to their wealth and devotion to Supraśl.

This relatively new museum offers interesting workshops and cherishes the memory of the famous monastery printing house. The Supraśl Printing House existed in the years 1695-1803 and pressed 452 registered items, some of them in the Cyrillic alphabet. Some editions reached even 10 thousand copies! It was here that for the first time in Poland Gulliver’s Travels, Le Cid and Songs of Reverence by Franciszek Karpiński were published.

Strolling around Supraśl you will encounter gems of wooden architecture at every step. It is worth paying attention to the Old Post Office with a beautiful broken roof, modernist (!) People’s House and houses of weavers located mainly along 3 Maja Street. Weavers’ houses were built by Wilhelm Zachert for the needs of workers who came here with him from the area of Zgierz. Each house was planned for 4 families. The building served as a flat and a workplace. Similar “workers’ colonies” were established at the Moes factory in Choroszcz and Hasbach in Dojlidy.

Supraśl spreads within the unique Knyszyńska Primeval Forest and its health resort status results from therapeutic mud and healing pine essential oils. Patients suffering from respiratory system illnesses customarily come here to improve their health. When in Supraśl, you need to stroll as much as possible, ride a bicycle and in winter ski. Along the Supraśl River Wiktor Wołkow Boulevards stretch out. In summer you may swim, play in the playing field or exercise in the open air gym.

Everyone who has watched the trilogy of Jacek Bromski titled “U Pana Boga za….” (Snug as a bug in a rug) will effortlessly find the police station in Królowy Most in Supraśl, the home of the chief of police and the chimney from which the desperate grandfather, that is, the father of the chief of police jumped. In the streets of the charming town a TV series titled “Blondie” is being shot and the Holy Trinity church is recorded almost in every episode.

The beautiful White Manor House (where the last abbot of the Supraśl monastery lived in the 19th century) now houses the headquarters of the Knyszyn Primeval Forest Landscape Park. Make sure to check it out – there are interesting permanent and temporary exhibitions waiting for you. Employees will tell you how to benefit from the wealth of the Knyszyn Primeval Forest and will help you choose the right walking route. There are three nature trails (Valley of Jałówki, Surażkowo and Kopna Góra), which will help you to get to know the values of the Landscape Park. Their length will not be too exhausting to anyone – they range from 2 to 4 kilometers with a few thematic stops.